Widely published in the languages, literatures, and cultures of the ancient world, from India to Ireland via Greece, Rome, and the Near East, I prefer in both my research and my teaching to prowl around topics rather than pursue one single line of inquiry: Hesiodic belly-prophecy and Horatian self-fashioning; Basque badgers and Roman testicles; acrostics in Vergil and blind eels in Archilochus; the phonology of Tocharian monosyllables and the morphological peculiarities of Gothic pronouns; hieroglyphic Egyptian puns and modern English slang; etc. Most of my publications fall into eight interrelated categories, listed here roughly in the order in which I became engaged with them: (1) “hard-core” problems in Indo-European linguistics, especially of a phonological or morphological nature and often concerning the reconstruction of pronouns, particles, and other “little” words; (2) matters of “Wörter und Sachen,” especially animals and body parts; (3) evidence of linguistic and cultural contact; (4) linguistic perspectives on myth, ritual, law, and religion; (5) Archaic Greek poetry, especially Homer and Hesiod; (6) Classical Latin poetry, especially Vergil; (7) the history and practice of wordplay; and (8) the history of scholarship. Above all, I am an etymologist and, more broadly, a historian of ideas.

Among the institutions to which I am deeply grateful for awards and fellowships over the years are All Souls College, Oxford; the American Council of Learned Societies; the Andrew W. Mellon Foundation; the Institute for Advanced Study; the John Simon Guggenheim Memorial Foundation; the Loeb Classical Library Foundation; the National Endowment for the Humanities; and the National Science Foundation. I have been a visiting professor at the Humboldt-Universität zu Berlin (2015), where I co-taught a course called “Reading the Rigveda from the Inside Out” with Christopher Minkowski (Oxford); the École pratique des Hautes Études (2011), where I delivered a series of seminars on “Étymologie et jeux verbaux dans le domaine indo-européen”; and Phillips Exeter Academy (2011 and 2014), which every few years lets me teach my heart out to high-schoolers. I will be spending a couple of months in London in 2017–18 thanks to one of the inaugural Dorothy Tarrant Fellowships from the Institute of Classical Studies.

At Princeton, I am a member of the Executive Committee of the Programs in Linguistics (of which I was once the Director), Freshman Seminars in the Residential Colleges, Teacher Preparation, and Translation and Intercultural Communication. Among my other roles on and close to campus, I am a committed Faculty Fellow and Adviser at Forbes College (where I was for a time Senior Fellow); a Trustee of the Princeton University Press (whose Editorial Board I once chaired), the American Whig-Cliosophic Society, and the Daily Princetonian (for which I was for seven years a Faculty Columnist); and a member of the Board of the Princeton Alumni Weekly, the Editorial Board of the Princeton University Library Chronicle, and the Council of the Friends of the Princeton University Library. In addition, I founded and was the first Director of the Behrman Undergraduate Society of Fellows, was President of the Princeton chapter of Phi Beta Kappa (Beta of New Jersey) for two terms, led the Creative Arts & Humanities Symposium for high-school seniors for five years together with Michael Cadden, Jeff Dolven, and Paul Muldoon, and was the longtime Faculty Chair of the endorsement committee for the Rhodes and Marshall Scholarships. Current positions in the wider world include Director-at-Large of the American Oriental Society, member of the Membership Committee of the Society for Classical Studies, and member of the Educational Advisory Board of the John Simon Guggenheim Memorial Foundation.

Besides “Ancient Greek: An Intensive Introduction,” which is reputed to be “harder than orgo,” courses that I teach include “Origins and Nature of English Vocabulary” and “Introduction to Historical and Comparative Linguistics”; the most recent addition to the roster is “Language at Princeton,” which gives undergraduates the chance to investigate town and gown in a hands-on way and debate one another on issues that range from the history and current success of the University’s foreign language requirement to the limits of free speech. My freshman seminars so far have been “Writing Systems of the World,” “Ancient Egypt and its Hieroglyphs,” and “Wordplay: A Wry Plod from Babel to Scrabble,” the last of which Time magazine gave a shout-out to in 2015 (“11 Bizarre College Courses We Actually Want to Take”) and was ranked #2 on the list of “22 Fascinating and Bizarre Classes Offered this Semester” by Mental Floss (a class on Lady Gaga at the University of South Carolina took the top spot) and #7 on the list of 18 “Hottest College Courses” by the Daily Beast, both in 2011. As for graduate seminars, I regularly offer instruction in such topics as Proto-Indo-European, Linear B and the Mycenaean world, Greek Dialects, the historical and comparative grammar of Latin, Vedic Sanskrit, and Old Irish. A particular delight has been co-teaching with Andrew Ford (“Homer’s Iliad: Language, Style, Text”) and with two dear friends in, respectively, English and History: Jeff Dolven (“Style and Rule”) and Michael Gordin (“Imagined Languages”).

I am especially honored to have won, at Princeton, both the President’s Award for Distinguished Teaching (2003) and the Phi Beta Kappa Teaching Award (2008), as well as to have received the Sophie and L. Edward Cotsen Faculty Fellowship in recognition of “outstanding undergraduate teaching” (2013–16). My profile may be found in a book with the syntactically awkward title The Best 300 Professors (New York 2012), and not long ago a dream came true when Ian Frazier wrote about me (“dark suit, high forehead, merry eyes behind Santa Claus glasses”) in “The Talk of the Town” (New Yorker, August 3, 2015). I warmly welcome inquiries from students at all levels who find appealing anything that I have written here. 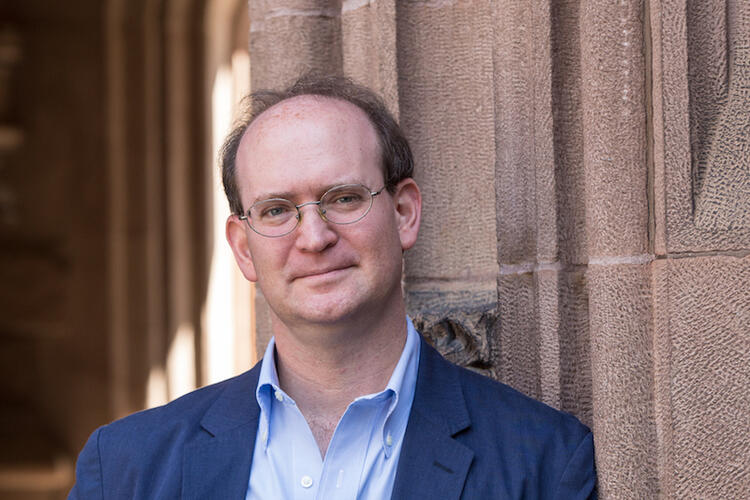 Cotsen Professor in the Humanities
Professor of Classics