I studied Classics in Würzburg and Tübingen before moving to Cambridge, where I received my PhD. After spending two years as Eugenie-Strong Research Fellow at Girton College Cambridge, I taught Greek and Akkadian language and literature at Durham University, before joining the Princeton Classics Department in Fall 2018.

I am interested in the literatures of ancient Greece, Rome and Babylon, and in the interactions between them. My research initially focused on Homer (Homer’s People, CUP 2000; Homer: The Resonance of Epic, Duckworth 2005; Homer: Iliad VI, CUP 2010, the latter two jointly with Barbara Graziosi) and I continue to work on early Greek epic, especially in relation to other branches of classical culture such as ancient philosophy (Plato and Hesiod, ed. with George Boys-Stones, OUP 2010, Chinese translation ecnupress 2016).

After learning Akkadian as a Postdoctoral Fellow in Cambridge, I became interested in Babylonian literature and its relationship to that of Greece: the monograph Greece and Mesopotamia: Dialogues in Literature, CUP 2013 (recipient of the PROSE Award in the category ‘Classics and Ancient History’) and ‘The Achaemenid Empire and the Sea’, an article that investigates how the Persians understood their invasion of Greece under Xerxes (Editor’s Choice in the 30th year edition of Mediterranean Historical Review) stem from that interest. I have also edited The World ofBerossos, with Gianni Lanfranchi, Robert Rollinger and John Steele (Harrassowitz 2013) and Keeping Watch in Babylon: The Astronomical Diaries in Context, with John Steele and Kathryn Stevens (Brill 2019). The Astronomical Diaries from Babylon,  which are still barely known even among specialist scholars, formed the basis of ‘Chaldean’ astrology and thus deeply influenced the way people from across the ancient world lived their lives.

I am a member of the Academy of Europe and have held visiting fellowships at Harvard’s Center for Hellenic Studies and the University of Leiden, and a visiting professorship at the École Pratique des Hautes Études in Paris.

Beyond my own research I enjoy working in teams and am grateful to the friends and colleagues who have shared their knowledge and insights with me over the years. I feel especially indebted to my graduate students, some of whom are now colleagues. PhD projects for which I have acted as first supervisor in the past include ‘Darius and his Audiences: A Study of the Royal Inscriptions and Their Earliest Reception’; ‘Homer and the Poetics of Hades’ (published OUP 2018); and ‘Beyond Alexandria: Hellenistic Literature and the Seleucid Empire’ (published OUP 2020).

My aim, in both teaching and research, is to integrate the study of ‘classical’ languages and literatures with that of ancient ‘Near Eastern’ ones. I have written about my vision for a Classics without disciplinary border fences in a short piece for the Journal Expositions, which can be accessed here.

I teach a wide range of courses on ancient Mediterranean and Near Eastern languages and literature. In Fall 2021 I team up with my colleague Daniel Sheffield from Near Eastern Studies for 'Near Eastern Humanities I: From Antiquity to Islam', a course that introduces students to the literature, art, philosophy and science of the ancient Near East. I also offer 'Beginner's Greek', an introduction to the Attic dialect used by Plato among others. In Spring Semester 2022 I teach 'Akkadian', an introduction to the main literary language of ancient Babylon. 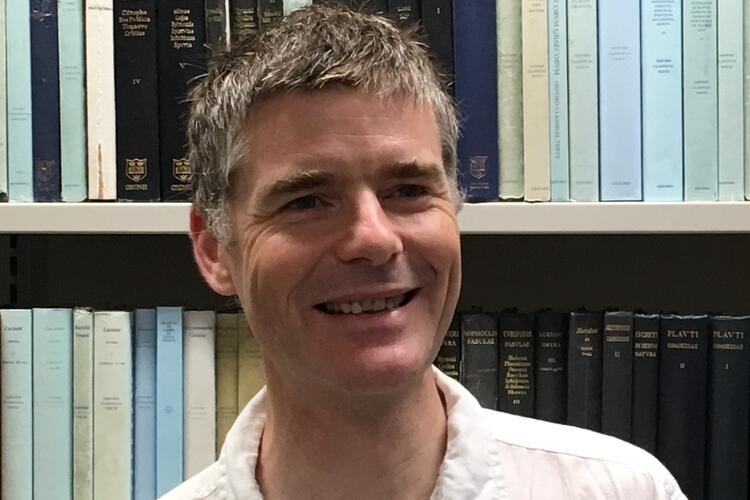