This presentation explores how Takeuchi Hideki’s Thermae Romae (2012) uses the epic cinematic site of ancient Rome to project and confront its empire nostalgia. Ancient Rome on screen has often functioned as a lens through which filmmakers of different nationalities could negotiate their relationships with the ideas of power and empire, and the screening of ancient Rome still influences the way nations can both promote their own identities and also reflect upon their past histories. The film Thermae Romae screens Roman antiquity in a new way in order to interrogate Japan’s current relationship, both proud and painful, with its memories of Empire.

Ancient Rome and modern Japan are cultures of extraordinary global influence, both defined by the beauty and power of their intellectual and cultural achievements, both celebrated and reviled for their imperial ambitions and actions, both firmly structured around traditional social hierarchies, both fixated on the mysteries of death and meticulously observant of its ceremonies, and both passionately obsessed with bathing, in all its rituals and accoutrements.

This presentation considers the relationship between ancient Rome and modern Japan as presented in Thermae Romae, the successful film adaptation of Yamazaki Mari’s best-selling six-volume manga of the same title (2008-13). The film, a time-traveling comic fantasy, is set in the year AD 128 in the time of Emperor Hadrian, and introduces the character Lucius Modestus (Hiroshi Abe), a prominent Roman bathhouse architect who is disheartened by his lack of new ideas. Under pressure to satisfy the Emperor’s hunger for innovation, Lucius tries to relax away his troubles in the Roman thermae, when he is sucked through a drain/time-tunnel and emerges into a present-day Japanese public bathhouse.

The first half of the film offers numerous site gags that capitalize on the familiar “fish out of water” screen trope crossed with the foreigner who is stupendously impressed by Japanese ingenuity: Lucius is both amazed and inspired by Japanese aquatic marvels. Guiding him through this wonderland of hydraulic technology is Mami (Aya Ueto), an aspiring manga artist (a sly intertext with the story’s graphic origins), as Lucius travels back and forth from Rome to Japan, picking up new ideas. The second half of the film, however, delves into imperial court intrigue, when Lucius attempts to bolster the regime of the noble Emperor Hadrian (Masachika Ichimura), whose position is challenged by a dissolute aristocrat, Ceionius (Kazuki Kitamura). It is up to Lucius to use his knowledge to save the Roman Empire.

This presentation examines the way the film interrogates the theme of empire nostalgia: how the casting of the statuesque Abe and other Roman roles with established Japanese actors, speaking both Japanese and Latin, encourages the visual and aural identification of the two cultures; how the filming location at Cinecittà studios in Rome promotes a link with the golden age of “Hollywood on the Tiber” productions and their nationalist strategies; how the adaptation from the hip native genre of manga to the conservative epic cinema effects a crucial shift in tone and compels a greater focus on the narrative of empire; and how setting the film in the Hadrianic reign permits the use of the “Gladiator formula,” that is, the negotiation of the “good vs. bad” imperial models. This presentation highlights the endurance of the Roman epic cinematic model by demonstrating that it is a valuable site for the projection of modern anxieties and aspirations even in contemporary Japanese film. 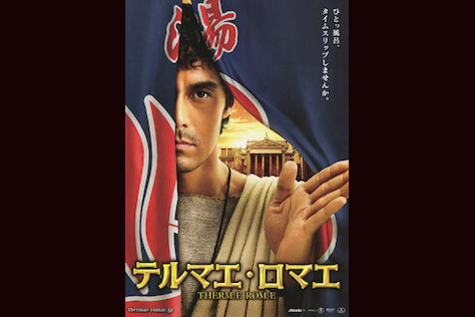