Shivaike Shah, founder of Khameleon Productions and Visiting Artist at Brown University, delivered a talk on Princeton’s campus the evening of Thursday, February 24th, as part of his countrywide “Uprooting Medea” tour.

In a multimedia presentation to audiences in person and on Zoom, Shah presented the genesis of the project and tour. It can be traced back to his days as an undergraduate student at Oxford University, where he was active in theatre. While working on a production, he encountered fellow undergraduate Francesca Amewudah-Rivers, one of the cofounders of Oxford’s BAME Drama Society (‘BAME’ stands for Black, Asian, and ethnic minority).

This encounter led to Shah’s involvement with a highly successful 2018 production of an adaptation of Euripides’ Medea led by BIPOC cast and crew members. Speaking via pre-recorded video, Amewudah-Rivers explained that the production had launched many cast and crew members into careers in the arts and had helped create the structural change she had envisioned in artistic communities and industries at Oxford and beyond.

After graduating, both Shah and Amewudah-Rivers embarked on separate careers in fashion and entertainment. However, when lockdown hit in March 2020, Shah found himself thinking back to that 2018 production. He contacted Amewudah-Rivers and they began work on a new script for a theatrical production, going through the Greek original of Medea line by line in consultation with Princeton Classics alum Dr. Rosa Andújar (King’s College London) and Professor Avery Willis Hoffman (Brown University).

Faced with ongoing COVID lockdowns that made launching a theatrical production impossible, the team pivoted toward developing a short, non-narrative film about the character of Medea. On Thursday, Shah presented clips from this visually and aurally riveting production, directed by Riffy Ahmed and starring Selina Jones. Accompanied by a chorus of veiled dancers, Jones’s Medea moves through a beautifully ruined apartment, reciting dialogue drawn from Euripides’s play. She is accompanied by visuals, music, and choreography that represent the character’s experience impressionistically. The film will be touring festival circuits this year.

Shah’s Uprooting Medea tour grew out of his work on the film. He came to the U.S. as a visiting artist at Brown, and was inspired to tour different institutions to engage audiences in dialogue around questions raised by this work: What questions around belonging, identity, and home does Medea raise? What are the implications of using a Classical source to think about issues of relevance to young Black and brown people around the world today?

Shah’s presentation was followed by a lively question and answer session in which students and faculty from Classics engaged the producer on questions raised by the work he has been doing. As evidenced by the audience’s response, Shah’s visit represented a welcome opportunity for the Classics Department to engage with the arts community on issues of pressing importance in the academy and beyond.

Shah, who previously collaborated with Holmes in developing creative projects for an undergraduate course on Medea, was busy during his time on campus. In addition to this presentation, he hosted sessions about professionalization and pedagogy for graduate and undergraduate students. Together with the tour and the film, he has been working to consider issues around race and the Classics through the Khamelon Classics podcasts, where he has spoken to academics including Princeton’s own Brooke Holmes and PhD alum Kathleen Cruz (UC Davis). 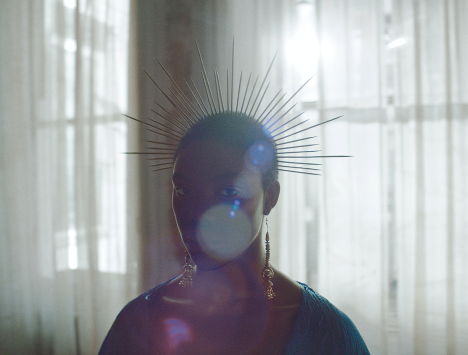 Selina Jones as Medea, in a golden crown.