On the evening of Thursday, April 18th, Rebecca Flemming (Cambridge University) delivered the 2022 Prentice Lecture, entitled “Galen on Race, Health and Disease: Medicine and Empire in the Roman World.” This informative and wide-ranging talk, presenting part of Dr. Flemming’s research for a forthcoming book on medicine and empire, engaged issues of relevance to everyone doing work in Classics today.

After a warm introduction from Professor Brooke Holmes, Flemming began by discussing Galen’s conception of skin color in relation to health and the environment. For Galen, as it turns out, there were definite divisions of populations by skin color, and this division reflected environmental factors, but was not in itself a sign of health or disease. According to Flemming, Galen thought his system should account for how skin color and other aspects of the body’s appearance correlate with different parts of the Roman world, but they ultimately seem incidental to the question of health.

This issue opens up into Flemming’s central methodological question: whether the relationship between race and empire in the modern period offers any useful analogies for the ancient world. On the one hand, the fact that Galen insists skin color is superficial to the healthy functioning of the body suggests a major difference between his perspective and modern imperialist and racist discourse about non-white peoples. On the other hand, the fact that Galen distinguished between discrete demographics based on skin color suggests some analogy, however unstable, with modern ways of thinking about race.

Classicists have often been reluctant to speak about “race” as a category in the ancient world, since this idea is essentially a result of particular circumstances in the modern period. In this line of reasoning, race is simply not “good to think with” when it comes to ancient societies, because it leads to anachronistic assumptions. While acknowledging this concern, Flemming positions her work as part of a broader movement to take a harder look at race concepts in the ancient world, framing race not based on content –i.e. what race is – but on power – what race does.

Flemming’s central argument was that ideas resembling modern racism reinforced Rome’s imperial dominion, and that classicists should therefore examine the role that medical writers like Galen played in producing those ideas. From the outset, she was careful to acknowledge the differences between ancient and modern race concepts: modern racism in many parts of the world today is based on a model of biological determinism in which the essential fixity of categories plays a crucial role. Galen’s race concepts, meanwhile, are based on a model of environmental determinism, allowing for much greater fluidity in thinking about race.

Flemming cautioned, however, that fluidity is not necessarily a “good” thing. She carefully showed that, in Galen’s imagination, the habitable world is divided into zones with unequally salubrious environments. The healthiest climates, yielding the best constitutions, the “best bodies,” happen to be roughly coterminous with centers of imperial power in the Roman world. Race may not be a teleological category, like gender, in Galen’s thinking, but his system nonetheless creates a clear hierarchy of environments and peoples, privileging center over periphery, and “us” over them. Medical writings thus played a role in constituting empire as a kind of healthy, unified space, in contrast to the unhealthy extremes outside its proper bounds. Against more optimistic assessments of ancient society, Flemming argued that it would be a mistake to see this as less insidious than a system based on modern race concepts.

In the question-and-answer session following the talk, Flemming and audience members thought together about some of the contradictions emerging from Galen’s system: if hair texture and skin color are products of a malleable constitution determined by one’s environment, why would people moving from the edges of the empire to its center not change appearances over time? How fluid was race really in Galen’s thinking? From these questions, it emerged that, rather than forcing self-consistency onto Galen, it may be most instructive to meditate on his contradictions—to ask, if these questions did not seem particularly troublesome to Galen, why not? 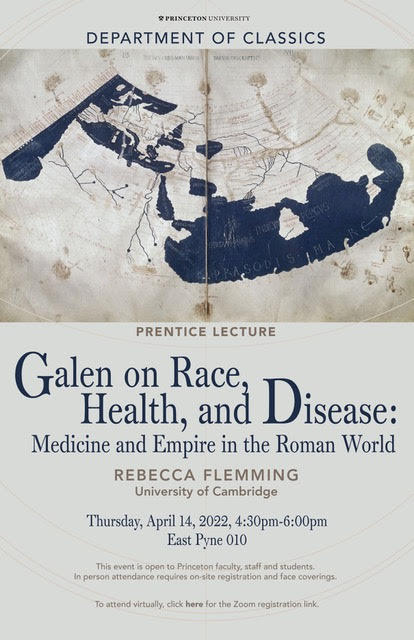