Ge’ez, or Classical Ethiopic, is one of the ancient world’s major literary languages, with two millennia of history in the Horn of Africa and Arabia. The language appears in many ancient inscriptions and in Jewish and Christian writings, even shaping the language of the Qur’an and early Muslim religious texts. It continues to live on today as the liturgical language of the Ethiopian and Eritrean Orthodox churches.

And yet hardly anyone outside East Africa can read or understand it today.

This summer, 12 students participated in an intensive Ge’ez summer course at Princeton, taught by Hamza M. Zafer, associate professor of Near Eastern Languages and Civilization at the University of Washington and currently a Katz Fellow at the University of Pennsylvania.

The students, who included professors, curators, undergraduates, and graduate students, met four days a week for two months to learn the script, grammar, vocabulary, historical setting, and context of Ge’ez.

According to Professor Zafer, the course was designed to encourage students to revisit received ideas about what constitutes western literary and aesthetic history. “Perhaps it's time to expand the Classics beyond Europe," he said. "This would mean not only studying how racialized bodies appear in ancient European literature and art but also meaningfully bringing non-European voices into our view."

“It means expanding the linguistic basis of what we consider our ancient literary and aesthetic heritage—our Classics.”

Princeton holds the largest collection of classical Ethiopic manuscripts in North America, Professor Zafer said, but there is no curricular plan for training scholars and students to access and study that corpus. His hope is that introducing students to Ge’ez will lay the foundation for future research into the influence and significance of Ge’ez in antiquity.

Sarah Derbew, Assistant Professor of Classics at Stanford University, attended the class, motivated by her experience as a child hearing Ge’ez at the Ethiopian Orthodox Church during holiday services. “Classics departments in the US are openly discussing their desire to diversify their curriculum and student body, part of this mission includes rethinking what material is included in the Classical curriculum,” she said. “It is rare that opportunities to study an ancient African language, or history, are offered in academic spaces

“Dr. Zafer effortlessly situates Ge’ez among other Semitic languages—Syriac, Arabic, Hebrew—while also recognizing the significance of Ge’ez itself in the Horn of Africa.”

The course attracted significant interest, with more than 50 applicants. The final cohort of 12 included students from different disciplines and with different levels of prior experience in Greek, Latin, Hebrew, Arabic, and other languages.

Kierra Duncan, a graduate student in Princeton’s English department who researches African diaspora literature, said the class would help her to situate African-American literature in a longer cultural history.

“I am interested in nineteenth century African-American literature and canonical figures of the time are constantly mobilising Africa—especially African antiquity,” she said.

Professor Zafer, who was trained as a philologist, focuses on the literary and linguistic history of the eastern Mediterranean and the Red Sea regions during Late Antiquity. He began to teach himself Ge’ez more than a decade ago using Latin lexicons and grammars from the 1800s and email correspondences with Orthodox priests. His interest in the language was piqued while working on Quranic passages with Ge'ez vocabulary.

“The world that produced the Ge'ez corpus had deep ties with the Greco-Roman world, especially Egypt and the Levant, through the Red Sea and Indian Ocean trade,” Professor Zafer said. “I’m trying to show the students that the language offers more than just a different vantage point to understand antiquity in Europe.

“It allows them to center Africa in their understanding of antiquity around the Mediterranean and bring in the deeply connected worlds of the Red Sea and the Indian Ocean.” 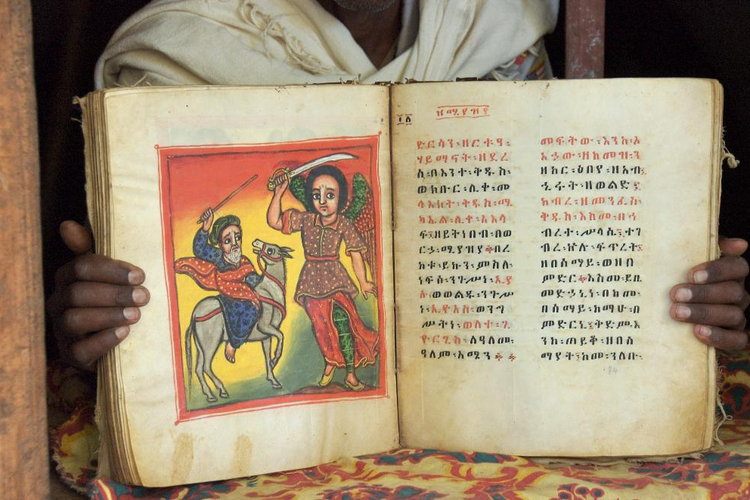