Is strategic rationality a modern way of thinking?

Not according to Josiah Ober, Mitsotakis Professor of Political Science and Classics at Stanford University, and formerly a professor at Princeton University. In the 2021 Magie lecture, run by Princeton’s Program in the Ancient World, Professor Ober argued that Ancient Greek approaches to explaining individual and collective behavior contain distinct similarities with modern decision and game theory, allowing us to use these theories when analyzing ancient texts. Over the course of a riveting hour, Professor Ober refuted the assumption that strategic rationality is a modern idea that arises out of uniquely modern conditions, such as the threat of nuclear war.

Professor Ober’s lecture began with the “folk theory” of individual rationality, which he described as “a foundational premise and a challenge for classical-era Greek intellectuals” that also “shares intuitions about motivation and action with contemporary Rational Choice Theory”. In this first part of the lecture, Professor Ober examined Thucydides’s application of “folk theory” to the behavior of city states.

Through logical close-readings of Thucydides that were supported by forensic presentation slides, Professor Ober argued that the ancient historian understood Athens as a rational, power-maximizing state and Sparta as a risk averse state. “For Thucydides Athens represents the taking of calculated risk, where Sparta represents fear of risk,” Professor Ober said. “Thucydides’s theory of power is also a theory of bargaining”.

Professor Ober’s lecture covered other ground, including Thucydides’s representations of poverty and roving bandits, Minos of Crete, and naval power and empire. In one extraordinary section of the lecture, Professor Ober played out Thucydides’s Minos-Athens paradigm as a bargaining game, complete with underlying assumptions and payoffs. “Thucydides allows us to imagine empire as a highly artificial bargaining game,” he said.

The lecture was introduced by Princeton Classics Professor and Director of the Program in the Ancient World, Marc Domingo Gygax, who highlighted Professor Ober’s contributions to scholarship on Ancient Greek institutions and legal and political theory. According to Professor Gygax, every student who passes through his classes at Princeton reads Professor Ober’s article, ‘Models and Paradigms in Ancient History.’

Professor Ober’s recent books include Demopolis: Democracy before Liberalism in Theory and Practice (2017) and The Rise and Fall of Classical Greece (2015), which won the Douglass North Research Award of the Society for Institutional and Organizational Economics. His current book project, tentatively entitled The Greeks and the Rational, investigates how ancient Greek historians and philosophers approached questions of individual motivation, social cooperation, and constitutionalism, arguing that certain of the problems they confronted and solutions they devised have analogues in contemporary decision and game theory. 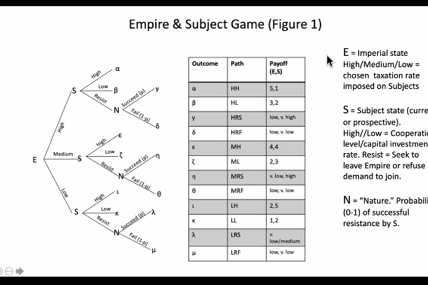