“I don't think of Antigone as the skeleton. I think of her as the marrow.”

This year’s annual Fagles Lecture was delivered in conjunction with the English department’s 17th Edward W. Said Memorial Lecture. Award-winning author Kamila Shamsie, a British-Pakistani novelist best-known for Home Fire, her extraordinary retelling of Sophocles’s Antigone, guided a rapt audience of students and professors through an array of topics including art history, ancient India, colonial education and literary fiction as part of a talk titled 'Antigone of Pakistan: Narrative Violence and the Impossibility of Homecoming’.

After an introduction from the Classics Department chair, Professor Michael Flower, Shamsie began an expansive lecture inspired by former Princeton professor and renowned translator, Robert Fagles, and the great theorist of cultural imperialism, Edward W. Said. Shamsie stayed true to both figures, weaving together their singular legacies of translation excellence, cultural theory, and intellectual ambition to argue that ancient Greek and South Asian cultures were deeply entwined. The talk was grounded in Shamsie’s imaginative engagement with literature from ancient Greece and art from Gandhara, an ancient Indian region covering Pakistan and parts of Afghanistan.

Shamsie talked in depth about Home Fire during the lecture. The novel tells the story of a young Muslim family in Britain. Two sisters are touched by the war on terror after their brother goes to fight for Islamic State in Syria, and ends up dead. When the state denies them the right to bring him back to the UK and bury him, Aneeka—whose name bears a thinly-disguised resemblance to Sophocles’s heroine—travels to Pakistan to watch over his body. Shamsie emphasized that the historical is often experienced and felt through the familial, which literature can access in a special way. She added: “It isn’t writers who shape the structure of the world. It really isn’t. You might change what a few people think and that’s not insignificant”.

Shamsie is the author of several novels including Broken Verses (2005), Burnt Shadows (2009) and Home Fire (2017), which was long-listed for the Man Booker Prize. Home Fire won the Women's Prize for Fiction in 2018. Shamsie's first novel, In the City by the Sea, was shortlisted for the Mail on Sunday/John Llewellyn Rhys Prize, and her second, Salt and Saffron, won her a place on Orange's list of '21 Writers for the 21st Century'. Shamsie, who lives between the UK and Pakistan, received the Prime Minister's Award for Literature in Pakistan in 1999.

During her lecture, Shamsie explored the colonial history that has bifurcated scholarship on ancient Greece and ancient India: “All aspects of the civilization of the colonized had to bend their knees to British civilization,” she said. “’Indo-Greek’ and ‘Greco-Buddhist’ are European words that deliberately separate Greek and Indian.”

The talk was followed by a question and answer session led by Classics professor Yelena Baraz. Shamsie answered questions about nostalgia, ancient India, the coloniality of Classics and her own imagined audiences. To that last question, from Classics professor Emily Greenwood, Shamsie said: “A novel, if it’s any good, allows multiple points of entry”. The same could be said for her talk.

The Fagles Lecture was conceived of by Classics Professor Andrew Feldherr and invites a distinguished writer or artist whose work engages with the Classics to Princeton each year. Support for this project was provided by Princeton's Departments of Classics, English and Comparative Literature, Humanities Council, Humanistic Studies, Lewis Center for the Arts, Seeger Center for Hellenic Studies, the Program in Humanistic Studies, the Edward W. Said Memorial Lecture Fund and the Princeton Committee on Palestine. 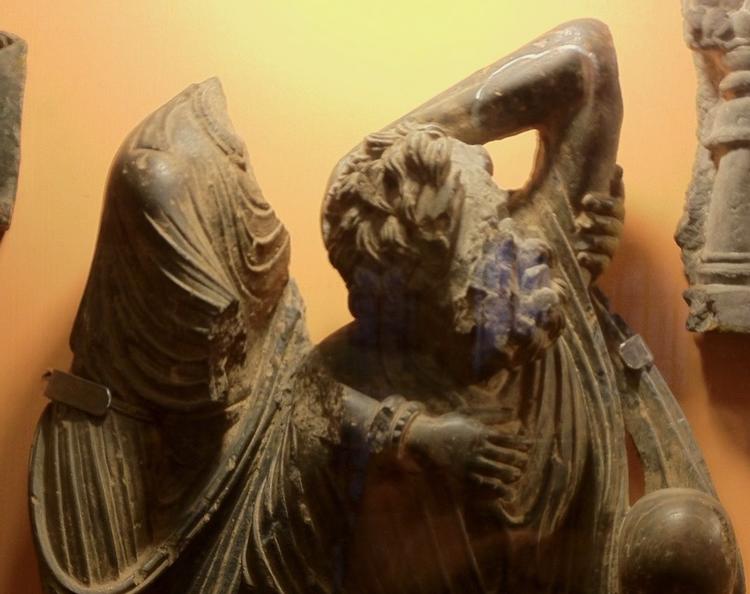