On a momentous day in which much of the country was watching the polls, the Princeton community was also fixated by another extraordinary event: the Fagles lecture. In the third iteration of the recently-established lecture for Classics in the Contemporary Arts, Tony award-winning director and MacArthur fellow Mary Alice Zimmerman took students and faculty through her extraordinary career in direction and adaptation as part of a talk called ‘Bodies I Have in Mind’.

After an introduction from the Classics Department chair, Professor Michael Flower, Zimmerman began a whirlwind lecture that was accompanied by dozens of images of her productions. The lecture was grounded in Zimmerman’s far-reaching and highly-acclaimed career as a director and creator of dramatic adaptations. Her productions include Metamorphoses, Arabian Nights, Pericles, The Jungle Book, The White Snake,and Armida, as well as an opera collaboration with Philip Glass and a new opera based on Sarah Ruhl’s Eurydice, due to be presented next year. In addition to her creative work, Professor Zimmerman is the Manilow Resident Director of Goodman Theatre, a member of Lookingglass Theatre Company, and holds an endowed chair as Professor of Performance Studies at Northwestern University.

Zimmerman began her talk on Tuesday, November 3rd by apologizing for any mis-pronunciations of the word “metamorphoses.” The comment was characteristic of a humorous and down-to-earth style that inflected her reflections on vivacious and innovative decisions that have made her one of the best-known directors and adaptors of classical texts.

In a lecture that was simultaneously personal in its reflections on creative decision-making and also deeply committed to the power of the texts and stories being discussed, Zimmerman drew widely on examples from her prolific career. Discussing the unique challenge of representing the impossible on a stage, for example, she told her audience about an activity she regularly sets performing arts students, in which she asks them to stage a dream. “They are forced to switch to a symbolic language to stage it fully,” she said. “They have to find a material body for this immaterial thing […] they have to get poetic.” 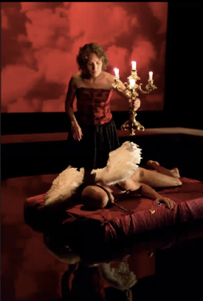 Describing various techniques for representing the impossible, Zimmerman raced through examples from her own shows. She talked about miniaturization, such as when her production of Argonautika created a small version of Jason’s ship; personification, such as when she transformed love into the figure Eros; and “simultaneity of image” when she shows the same impossible thing, for example an elephant, in multiple different ways at the same time. In one particularly striking example she discussed the difficulty of representing the music Orpheus hears in Metamorphoses, which is supposed to be impossibly beautiful. Zimmerman decided in her production not to have any music at all, but instead allow water to fall on Orpheus: “He just speaks and water falls on him—you hear the water.”

In another moment of pragmatic insight, Zimmerman showed an image of actors flapping their arms to indicate that they’re flying: “sometimes just pretending is best,” she said.

For Zimmerman, the beauty of theatre lies in its constraints, which force a director to draw on symbolic representation: “It’s like the language of lovers, you don’t have to say anything,” she said. “You don’t have to say that this cloth is water, but everyone knows it. And it makes people less lonely, because we realize that we all share this understanding.”

The talk was followed up by a question and answer session led by Professor of Classics Katerina Stergiopoulou. Their conversation focused on how best to represent narration on stage, and how to choose translations. Members of the audience then asked questions, which included one about Zimmerman’s collaboration with designers and costume designers. Always pragmatic, she described her eclectic sources of inspiration: “The audience are not experts on costumes,” she said. “If the women’s skirts hit the floor, then you’re fine—you’re already in the past.”

As the lecture came to a close, Zimmerman was asked about the impact that Covid-19 has had on theater. She did not mince her words: “I’m not going to sugar-coat it, the theater is in an existential crisis not seen since Oliver Cromwell.” Describing her own efforts to remain creative during the pandemic she admitted that she is “not a fountain of creativity right now”. She used her final words to remind her audience of what’s at stake: “support your local theatre and go back when it’s open again!”

The Fagles Lecture was conceived of by Classics Professor Andrew Feldherr and invites a distinguished writer or artist whose work engages with the Classics to Princeton each year. During the visit, which took place virtually this year, the guest gives a lecture and a class or reading, as well as meeting students and engaging in a public conversation with faculty members about their work. Support for this project was provided in part by Princeton’s Departments of Classics and Comparative Literature, Humanities Council, Lewis Center for the Performing Arts, Public Lectures Committee, Seeger Center for Hellenic Studies and the Program in Humanistic Studies. 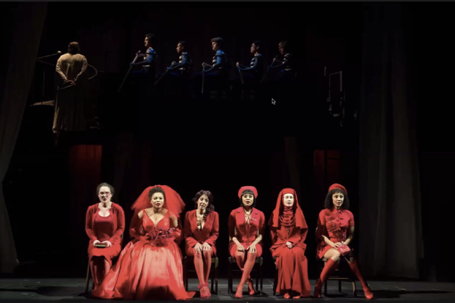